10 Scientific Benefits of Being a Dog Owner

Especially true for those working in the high pressure environment of a commercial kitchen and restaurant!! In my earlier blogs about reducing stress, I can personally vouch for the health benefits of owning a dog and how their exercise regime helps you to unwind, switch off for a few hours and get a little fitter. 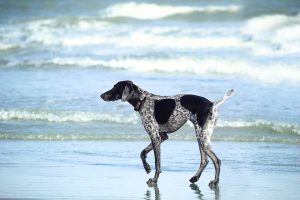 1 YOU GET SICK LESS OFTEN.

If cleaning commercials are to be believed, humanity is in the midst of a war against germs—and we shouldn’t stop until every single one is dead. In reality, the amount of disinfecting we do is making us sicker; since our bodies are exposed to a less diverse mix of germs, our entire microbiome is messed up. Fortunately, dogs are covered in germs! Having a dog in the house means more diverse bacteria enters the home and gets inside the occupants (one study found “dog-related biodiversity” is especially high on pillowcases). In turn, people with dogs seem to get ill less frequently and less severely than people—especially children—with cats or no pets

While dog dander can be a trigger for people with allergies, growing up in a house with a dog makes children less likely to develop allergies over the course of their lives. And the benefits can start during gestation; a 2017 study published in the journal Microbiome found that a bacterial exchange happened between women who lived with pets (largely dogs) during pregnancy and their children, regardless of type of birth or whether the child was breastfed, and even if the pet was not in the home after the birth of the child. Those children tested had two bacteria, Ruminococcus and Oscillospira, that reduce the risk of common allergies, asthma, and obesity, and they were less likely to develop eczema.

Everything about owning a dog seems to lend itself to better heart health. Just the act of petting a dog lowers heart rate and blood pressure. A 2017 Chinese study found a link between dog ownership and reduced risk of coronary artery disease, while other studies show pet owners have slightly lower cholesterol and are more likely to survive a heart attack.

4 YOU GET MORE EXERCISE.

While other pets have positive effects on your health as well, dogs have the added benefit of needing to be walked and played with numerous times a day. This means that many dog owners are getting 30 minutes of exercise a day, lowering their risk of cardiovascular disease.

5 YOU WILL BE HAPPIER. 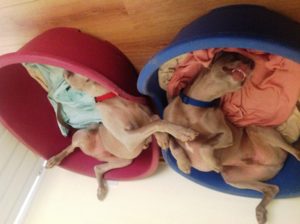 Let sleeping dogs lie. There is nothing more joyous when your dogs are safe in their beds and chasing rabbits in their sleep.

Dog owners are less likely to suffer from depression than non-pet owners. Even for those people who are clinically depressed, having a pet to take care of can help them out of a depressive episode. Since taking care of a dog requires a routine and forces you to stay at least a little active, dog owners are more likely to interact with others and have an increased sense of well-being while tending to their pet. The interaction with and love received from a dog can also help people stay positive. Even the mere act of looking at your pet increases the amount of oxytocin, the “feel good” chemical, in the brain.

6 YOU HAVE A MORE ACTIVE SOCIAL LIFE.

Four years ago, I moved into the new village in Yorkshire. Four years on and all our village friends stem from meeting them whilst out walking my dogs. We also starting Ballroom dancing because one the ladies we met out walking is the dance teacher! Not only does dog ownership indirectly tell others that you’re trustworthy, your trusty companion can help facilitate friendships and social networks. A 2015 study found that dogs can be both the catalyst for sparking new relationships and also the means for keeping social networks thriving. One study even showed that those with dogs also had closer and more supportive relationships with the people in their lives.

Your dog could save your life one day: It seems that our canine friends have the ability to smell cancer in the human body. Stories abound of owners whose dogs kept sniffing or licking a mole or lump on their body so they got it checked out, discovering it was cancerous. The anecdotal evidence has been backed up by scientific studies, and some dogs are now trained to detect cancer.

8 YOU’LL BE LESS STRESSED AT WORK.

The benefits of bringing a dog to work are so increasingly obvious that more companies are catching on. Studies show that people who interact with a pet while working have lower stress levels throughout the day, while people who do not bring a pet see their stress levels increase over time. Dogs in the office also lead to people taking more breaks, to play with or walk the dog, which makes them more energised when they return to work. This, in turn, has been shown to lead to much greater productivity and job satisfaction.

9 YOU CAN FIND OUT MORE ABOUT YOUR PERSONALITY.

The kind of dog you have says a lot about your personality. A study in England found a very clear correlation between people’s personalities and what type of dogs they owned; for example, people who owned toy dogs tended to be more intelligent, while owners of utility dogs like Dalmatians and bulldogs were the most conscientious. Other studies have found that dog owners in general are more outgoing and friendly than cat owners.

10 YOUR KIDS WILL BE MORE EMPATHETIC.

Though one 2003 study found that there was no link between pet ownership and empathy in a group of children, a 2017 study of 1000 7- to 12-year-olds found that pet attachment of any kind encouraged compassion and positive attitudes toward animals, which promoted better well-being for both the child and the pet. Children with dogs scored the highest for pet attachment, and the study notes that “dogs may help children to regulate their emotions because they can trigger and respond to a child’s attachment related behaviour.” And, of course, only one pet will happily play fetch with a toddler.

Hope you find this article useful. Remember a pet is for life, not just for Christmas. I’ve had 9 dogs since I was 19 years old and every one have been rescues.

About the Author: paul